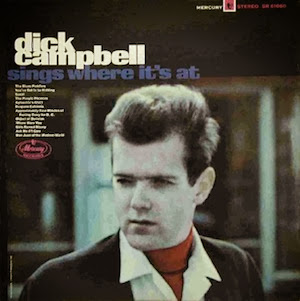 There are hundreds -- maybe thousands -- of mid-1960s records heavily influenced by and/or directly attempting to rip off Bob Dylan's transition from protest folk to imagistic folk-rock, shepherded by labels hoping to follow Mr. Zimmerman's path to the top of the charts.

Lots of them are entertaining, even when bold-faced stylistic steals (early singles by Mac Davis and Joey Levine come to mind). Another of the earliest and most interesting recordings of the mini-genre was by a songwriter who got his start in Monroe, Wisconsin: Dick Campbell, who released an entire album of Dylanesque compositions via Chicago's Mercury Records in late 1965.

By the time Dick Campbell Sings Where it's At emerged, Campbell had already released a series of local and regional singles both as a performer and producer, dating back to 1960. As related on an online tribute curated by his son, Gary, after a couple of Bob-influenced Cambpell songs made it to the ears of someone at Mercury, they invited him to write enough for a full album, which he quickly did.

Mercury producer Lou Reizner more than held up his end of the bargain by recruiting members of a couple Chicago bands to back Campbell singing and playing rhythm guitar. One -- the Butterfield Blues Band -- was already gaining some national fame in their own right. The other, a local band called The Exceptions, never broke through nationally but sent members on to groups such as Chicago (Peter Cetera), The Buckinghams (Marty Grebb), New Colony Six (Billy Herman) and Aorta (James Vincent).

In retrospect, the Butterfield connection was a real coup for Campbell's album. Lead guitarist Mike Bloomfield had that summer played on Dylan's Highway 61 Revisited album; he and members of the Butterfield band had also just helped Dylan take the Newport Folk Festival electric with a still-controversial July 1965 appearance. Bloomfield's distinctive playing (along with the basic organ chords provided by Mark Naftalin) give this album it's Dylanesque edge as much as those of Campbell's lyrics aiming for it.

It's easy to tell from the song titles that "singing where it's at" entailed working the same protest-oriented folk rock mine that the songwriting team of Sloan and Barri were riding the charts with in hits like "Eve of Destruction" and "Let Me Be." Campbell's songs include "The Blues Peddlers," "The People Planners," "Despairs Cafeteria," "Object of Derision," "You've Got to Be Kidding" ... I could go on, but I think you get the idea. So if that's not your cup of tea, this album is not for you.

However, in that case, the potential listener would be missing a solid disc that can be taken on its own merits beyond the easy comparisons. Campbell's songs are an entertaining slice of semi-snotty Midwest folk rock, played by some legendary musicians. What's not to like? As a bonus, there are serious-folk-album-style liner notes, with Campbell explaining the genesis of many of the songs and a description of the scene in the studio by fellow Wisconsin performer Steve Sperry. Even here in the area of Campbell's one-time Monroe home base, this album doesn't turn up much, so grab one if you see it.

Etiquetas: 1965, Dick Campbell, Mercury, Sings Where It's At